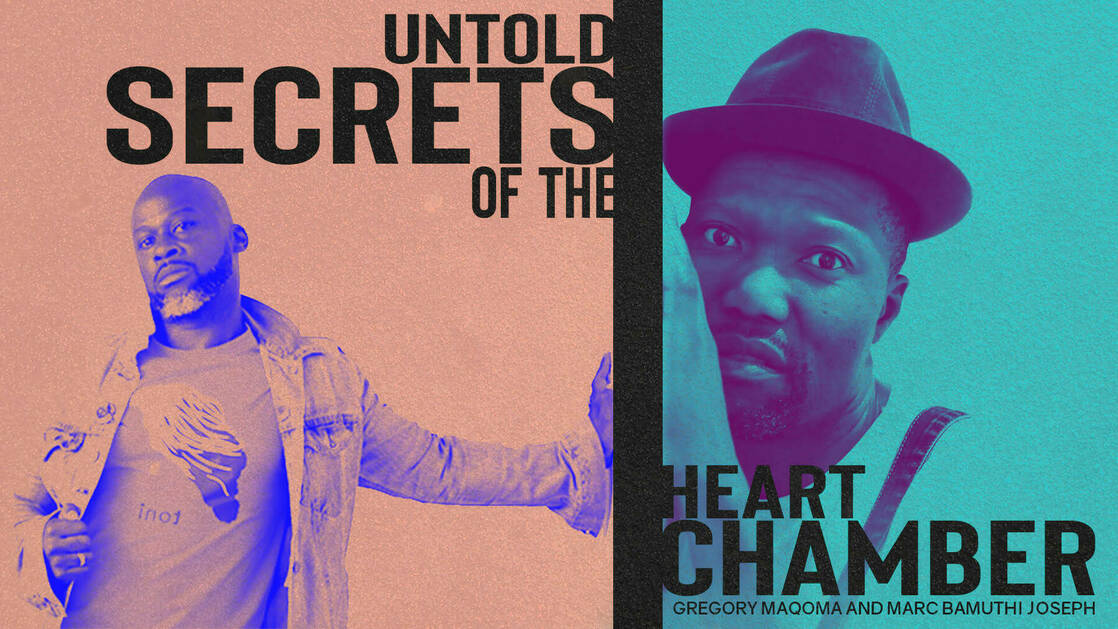 A Onine World Premiere of:

"Untold Secrets of the Heart Chamber"

This is a FREE event although there is a suggested donation of $10.

Building upon their partnership over the past few years and with a desire to work together to support artists and their creativity during this extraordinary moment in time, ADF and DANCECleveland have commissioned a new dance film by South African choreographer Gregory Vuyani Maqoma and poet, arts activist, and educator Marc Bamuthi Joseph. The screening will be followed by a conversation with the artists moderated by Gina Belafonte and Jefferson Tshabalala. The work will be available for additional viewings for 30 days following the premiere.

"Untold Secrets of the Heart Chamber" is a trans-Atlantic, pandemic-backdropped missive between almost strangers. Gregory Maqoma and Marc Bamuthi Joseph met in the fall of 2020 to begin discussing the matter of Black life as filtered through 25 years of South African democracy and one particularly hot summer on the American racial timeline. The result is a piece that connects these world-scaled events to the intimacy of the artists' respective homes and sanctuary spaces. "Untold Secrets of the Heart Chamber" is an 18-minute long dance film/live performance shot on two continents in the time of COVID-19. Edited by David Szlasa, and performed by Maqoma and Joseph, the work ponders democracy, what grandmothers leave behind, and the safety extended from Black fathers to their sons.

BAMUTHI (Marc Bamuthi Joseph) is a 2017 TED Global Fellow, an inaugural recipient of the Guggenheim Social Practice initiative, and an honoree of the United States Artists Rockefeller Fellowship. Bamuthi’s opera libretto, We Shall Not Be Moved, was named one of 2017’s “Best Classical Music Performances” by The New York Times. His evening-length work created in collaboration with composer Daniel Bernard Roumain, The Just and The Blind, was commissioned by Carnegie Hall and premiered to a sold out house in March 2019. His upcoming piece, In His Name, is inspired by the forgiveness exhibited by the congregation of Emanuel AME Church in Charleston and will premiere at The Perelman Center in New York in 2021.

While engaging in a deeply fulfilling and successful artistic career, Bamuthi also proudly serves as Vice
President and Artistic Director of Social Impact at the John F. Kennedy Center for the Performing Arts in
Washington, DC. He is in high demand for his creative approach to organizational design, brand development, and community mediation and has been enlisted as a strategic partner or consultant for companies ranging from Coca Cola to Carnegie Hall. His TED talk on linking sport to freedom design among immigrant youth has been viewed more than 1 million times and is a testament to his capacity to distill complex systems into accessible and poetic presentations. Bamuthi’s community development philosophy called “The Creative Ecosystem” has been implemented in dozens of cities across the United States and is the subject of several critical writings, including one of the seminal essays in Cultural Transformations: Youth and Pedagogies of Possibility, published by Harvard Education Press.

Bamuthi is the founding Program Director of the exemplary non-profit Youth Speaks and is a co-founder of Life is Living, a national series of one-day festivals which activate under-resourced parks and affirm peaceful urban life. He has lectured at more than 200 colleges and has carried adjunct professorships at Stanford and Lehigh, among others.

Gregory Vuyani Maqoma became interested in dance in the late 1980s as a means to escape the political tensions growing in his place of birth, Soweto, South Africa. He started his formal dance training in 1990 at Moving Into Dance where in 2002 he became the Associate Artistic Director. Maqoma has established himself as an internationally renowned dancer, choreographer, teacher, and director. He founded Vuyani Dance Theatre in 1999 when he was undertaking a scholarship at the Performing Arts Research and Training School in Belgium under the direction of Anne Teresa De Keersmaeker.

Several works in his repertoire have won him accolades and international acclaim. This includes FNB Vita Choreographer of the Year in 1999, 2001, and 2002 for Rhythm 1.2.3, Rhythm Blues, and Southern Comfort respectively. He received the Standard Bank Young Artist Award for Dance in 2002. Maqoma was a finalist in the Daimler Chrysler Choreography Award in 2002 and in the Rolex Mentorship Programme in 2003. He is the recipient of the 2012 Tunkie Award for Leadership in Dance. In 2014 he received a “Bessie,” New York City’s premier dance award, for Exit/Exist for original music composition. He served as a nominator in the 2016-2017 Rolex Arts Initiative as well as curating the 2017 Main Dance Program for The National Arts Festival. His current works Via Kanana and Cion: Requiem of Ravel’s Bolero have been halted from touring due to the COVID-19 pandemic.

In 2017 Maqoma was honored by the French government with the Chevalier de l’Ordre des Arts et des Lettres (Knight of the Arts & Literature) Award. In 2018 Maqoma was one of the selected visiting artists at Virginia Commonwealth University Dance Department as well as a visiting teacher at Ecole De Sables – Toubab Dialaw – Senegal. In 2018 Maqoma collaborated with William Kentridge as a choreographer and performed in Kentridge’s opera The Head And The Load which premiered at The Tate Modern Gallery in London in July and toured to Germany, Austria, Holland, and New York. Maqoma is part of the selection committee for Dance Biennale Afrique Festival to take place in Marrakech at a date yet to be announced.

In 2019 Maqoma collaborated with Idris Elba and Kwame Kwei-Armah in the production Tree produced by Manchester International Festival and the Young Vic. In 2020 Maqoma was honored by the International Theatre Institute in partnership with UNESCO to be the author of the prestigious International Dance Day Message.

Native New Yorker, Gina Belafonte has spent her life in the arenas of entertainment and activism where her professional work thrives today. Executive Director of Sankofa.org, a social justice organization, that enlists the support of today’s most celebrated artists and influential individuals in collaboration with grassroots partners to elevate the voices of the disenfranchised and promote peace, justice and equality, Gina works with diverse artists, activists and organizations worldwide to promote cultural and civic engagement in the 21st century. She has lectured and spoken at many events, rally’s and marches, issues ranging from Dyslexia, Nonviolent Direct Action, Black Women’s Empowerment and a cross section of social justice issues. An Artivist, Actress, Director and Producer, Gina has been a part of many arts and activism initiatives including being the lead producer of the award winning documentary Sing Your Song that explores the life and legacy of her father Harry Belafonte, the director of the award winning Hip-Hop spoken word musical Lyrics From Lockdown addressing mistaken identity, mass incarceration and police brutality. Gina is the proud producer of the The Many Rivers To Cross Social Justice Arts and Music Festival that brought together over 40 artists and 50 social justice organizations for a 2 day festival centering on voting rights, mass incarceration and poverty. She has collaborated with For Freedoms on the 50 State Initiative and the reimagining of Norman Rockwell’s Four Freedoms, INTO ACT!ON, and more. Please visit www.sankfa.org for more information.

Jefferson Tshabalala is the Standard BankYoung Artist of the Year for Theatre (2020). He is a multi-skilled creative, with multiple entrepreneurial ventures, and he has a keen interest in radically transforming the current landscape of the arts in South Africa. He believes that more needs to be done to give a platform to young artists, and he has used his influence to develop and provide opportunities for relatively unknown practitioners who have gone on to have good careers in the arts industry.

Untold Secrets of the Heart Chamber by Gregory Maqoma and Marc Bamuthi Joseph was commissioned by the American Dance Festival and DANCECleveland.